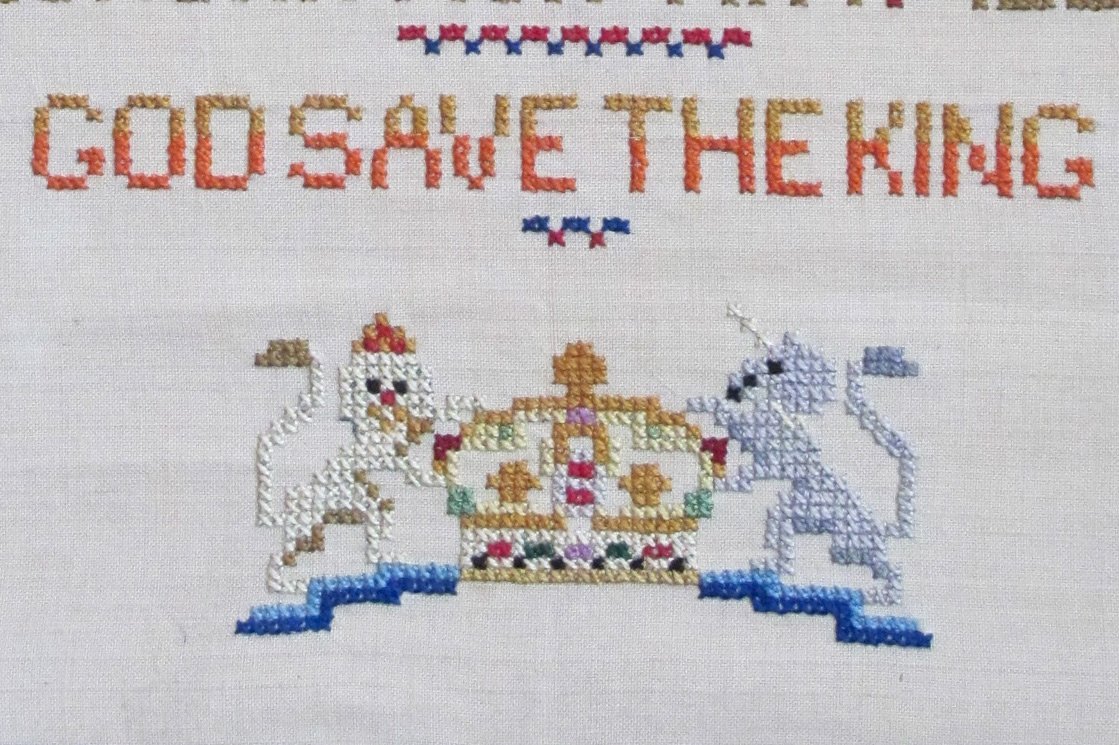 The lines aren’t all entirely straight and the stitches aren’t always even, but there’s no mistaking Windsor Castle rising above the treetops or the royal coat of arms down below, beneath the slightly imperfect slogan that appears to read GODSAVE THE KING. Back in 1936 someone spent days—perhaps even weeks—memorializing with a needle a moment in British history that never happened at all.

It’s a good guess it was a woman who worked this cross-stitch sampler in honor of the coming coronation of Edward VIII. She had plenty of time to complete it. After the new king ascended the throne upon the death of his father, there was a year’s worth of planning for the big formal hoopla at Westminster Abbey with ermine-trimmed capes and crowns.
But things didn’t go as expected that year. The king, perhaps never truly keen, balked at the limits the monarchy imposed on his personal happiness. To the great surprise of his subjects, who’d largely been kept in the dark about things, Edward announced in December that he was renouncing all claim to the throne to marry twice-divorced American socialite Wallis Simpson.

The love of his life was not—speaking bluntly—Queen of England material. If he insisted on marrying her, abdication was his only option. His crown, and his planned coronation, would go to his brother instead.

By that time the sampler was already stitched. It’s hard to know how the woman who worked it felt about what had happened. Maybe she found it romantic—the king who gave up his kingdom for love. Or maybe she viewed abdication as a dereliction of duty. Either way, it’s a pretty sure bet she thought about all the hours she’d put into in making that fussy sampler: the lion and the unicorn, the standard over the battlements, 84 letters and numerals, thirteen shades of embroidery thread. She could have stuffed it away in a drawer.
She chose to frame it instead.

You’ve got to love her for doing that. Did she hang it in the spare bedroom? The hall? In pride of place in the sitting room? Did she point it out, make a joke of it, or wait until visitors noticed and everyone had a good laugh about how life seldom turns out as planned? Sixty years later I spotted her work in the window of a charity shop in the small English town of Thetford. I like to think she kept it until they carried her out in a box.

It hangs on a wall in America now. The glass of the thin black Woolworth’s frame got smashed in my soft-sided luggage but otherwise it’s exactly as it was in the 1930s, in the days of radio broadcasts and slouch fedora hats. It’s a tangible, hand-stitched reminder that history doesn’t always march ahead in a tidy fashion, and that all kinds of people—big and small—get bumped when it heads for the bushes.

Sometimes what doesn’t happen is even more interesting than what does.

GODSAVE THE KING and all that.