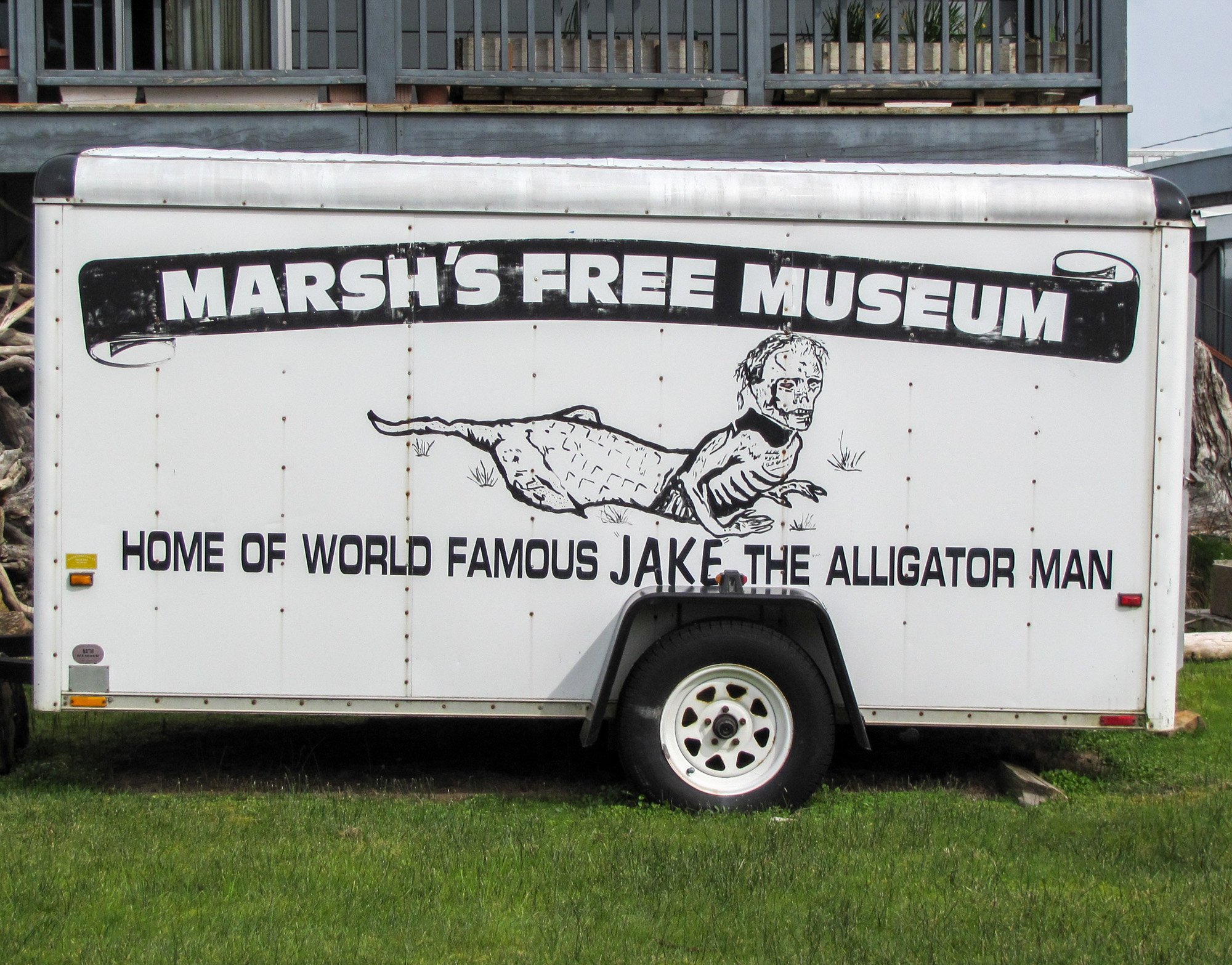 Okay, it isn’t a real museum—not in the modern sense of the word. No curators, no lecture halls, no yellow school buses unloading hordes of fourth-graders out on the sidewalk. Marsh’s Free Museum, located on the Washington coast, owes more to P.T. Barnum than it does to Charles Darwin, though the two-headed calf and the eight-legged lamb would surely have intrigued them both.

Marsh’s is a souvenir shop in the seaside resort of Long Beach. It’s a strip mall emporium gussied up with an old-fashioned false wooden storefront, halfway between the go-cart track and the kite shop with miniature golf. For the better part of a century Marsh’s has lured customers with an irresistible array of oddments and curiosities. There’s no charge for looking—a human tapeworm! A real shrunken head!—but gawkers find plenty of taffy and trinkets for sale once they get through the door.

You’ll find more than a whiff of the dark and macabre but it isn’t all carnival sideshow. There’s a lovely assortment of glass fishing floats, old motion-picture peepshow machines, a clockwork canary that flicks its feathers and opens and closes its beak as it sings (which must have seemed like a marvel back in the 1890s), and a giant player piano—dubbed a “Seeburg Orchestra”—that plays 10 manic ragtime tunes with mandolin, violin, castanets, flute, xylophone, triangle, cymbals, and two kinds of drums thrown in on the side.

Still, though the Seeburg is popular, the biggest draw at Marsh’s is the blackened, ossified carcass of a creature—part reptile, part human—known as Jake the Alligator Man.

Jake is difficult to describe and even harder to photograph in a manner that does him justice. Picture a dog-sized centaur with lizard parts where the horse parts should be and primate parts from the waist up. Jake is a Long Beach celebrity, with his own fan club and merchandise and a birthday party each August. Bumper stickers sporting his shriveled, unlovely visage are proudly plastered on secondhand cars throughout the Pacific Northwest.

So maybe “museum” isn’t quite the right word.

Then again, maybe it is.

Some of the world’s most respected museums began as “cabinets of curiosity,” private collections of wonders assembled by well-to-do gentlemen in the 17th century. Fossils, stuffed dodos, old Roman coins—sometimes even a dragon’s egg or the horn of a unicorn. Elias Ashmole (whose collection gave rise to Oxford University’s Ashmolean Museum) and Sir Hans Sloane (whose bits and bobs formed the foundation of the famous British Museum) might have had better pedigrees, but under the skin they were brothers with two men in Long Beach, father and son, both named Wellington Marsh.

Perhaps the most extraordinary thing about Marsh’s Free Museum is the fact that it’s still drawing visitors. You’d think in the 21st century, when hobbits and dinosaurs spring large as life from CG wizards in Hollywood, we’d all be a little too jaded for a stuffed two-headed piglet or a water snake in a jar.

And yet still they come—middle-aged couples, families with kids, clam-diggers, beachcombers, stoners and hipsters, gaggles of Japanese tourists. Marsh’s, for all its hokum, speaks both to the power of artifacts and the deep-seated human hunger for wondrous, mysterious things.

We want to be wowed by the stuff of this world, not just by scenes on the video screen. We want to see Jake with our own two eyes because we’ve never seen such a thing and may never see it again. According to Google Keyword, 110 people each month search the internet with the phrase “Is Jake the Alligator Man real?” While that may suggest we ought to revisit how we teach critical thinking, it proves what a vivid impression a tangible object still makes.

Marsh’s shook $5.35 in change from my pockets last Saturday. Three dollars on saltwater taffy. A $2.00 bumper sticker. Ten cents to make the moth-bitten clockwork canary sing. Twenty-five cents—guilty pleasure—to set a Victorian automaton in motion, making the gates of a tiny, forbidding English prison swing open and the floor of a small gallows drop. It’s a work by the noted John Dennison, a miniature morality play enacted by cuckoo-clock figures, that is somehow both morbid and charming.